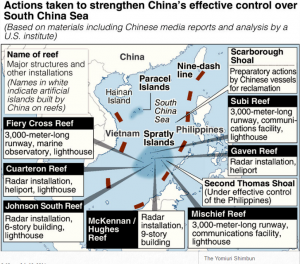 All papers ran extensive front- and inside-page reports on the ruling made on July 12 by the Permanent Court of Arbitration in The Hague that there is no legal basis for China’s claim of historic rights to resources within the “nine-dash line” in the South China Sea. In a meeting with EU leaders in Beijing, President Xi said that China will not accept any claim or action based on the award issued by the Tribunal.

Foreign Minister Kishida issued a statement saying: “As the Tribunal’s award is final and legally binding on the parties to the dispute under the provisions of UNCLOS, the parties to this case are required to comply with the award.” DOS Spokesperson Kirby was quoted as saying in a statement that the decision by the Tribunal in the Philippines-China arbitration is an important contribution to the shared goal of a peaceful resolution to disputes in the South China Sea.

The papers wrote that tensions between China and the international community, including the U.S., will likely increase because China reacted strongly to the ruling. Mainichi and Yomiuri wrote that the international coalition against China will likely be tightened following the ruling. Mainichi added that the U.S. will probably continue its freedom of navigation operations in the South China Sea in the view that the Tribunal’s award supports the validity of the operations. The paper also wrote that the ruling dealt a severe blow to the Xi administration because the increasing international pressure on China could provoke domestic criticism against Xi. Yomiuri wrote that the GOJ is closely examining the details of the award, which classified maritime features occupied by China as rocks, not islands, in the view that the ruling could affect Japan’s handling of the Okinotori Islands in the future. Nikkei wrote that international unity on the rule of law of the sea will be tested and that the ruling will help Abe seek a peaceful solution of Japan’s disputes with China over the Senkaku Islands and gas field development in the East China Sea.