Increase in drunk driving in Okinawa worst in history

Okinawa Prefectural Police Department announced on Monday that the number of arrests made in connection with drunk driving in the prefecture during the first half of this year (Jan.-June) increased to 844 cases. This statistic is 13.4% (100 cases) higher compared to the same period last year. The pace of increase this year is even faster than the last year, when Okinawa was recorded as the worst in the nation in terms of the percentage of drunk driving within traffic accidents involving human casualties and fatalities. The Traffic Enforcement Division of the prefectural police says, “There are still many drivers who think ‘I will not get caught’ and ‘I will be fine’. We will double our enforcement efforts.”

The number of accidents from drunk driving dropped by nine cases (46) this year. The accidents resulting in death occurred six times, which is the same number as the previous year. The percentage of accidents involving drunk driving among all traffic accidents with human casualties in Okinawa are 1.82% in cases of human injuries, and 37.5% in cases involving fatalities. The Okinawa record this year would likely be the worst in the nation. Arrests increased by 79 to a total of 293 so far.

Types of accidents that entail heavier penalties increased since last year. There was a recent case of two U.S. servicemen driving on the opposite lane on a national highway after drinking, which resulted in a head-on collision that caused serious injuries to occupants of the other car.

According to a police survey in 2015, 72.5% of drivers who were caught for drunk driving answered “I had planned to drive after drinking”. The percentage was the worst since the police started collecting data in 2003. (Abridged) 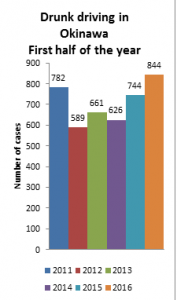