The CSIS-Nikkei Virtual Think Tank, an institute jointly established and operated by Nikkei Inc. and the U.S. think tank Center for Strategic and International Studies (CSIS), conducted a survey of sentiment on Japan-China relations targeting roughly 3,000 employees of Japanese companies. Many pollees were concerned about the political risks related to China given the South China Sea issue, and 40% recommended Japanese companies doing business in China “cut back on China operations in the future.”

The online survey was conducted from the end of May to mid-July of 2,827 persons of subsection-manager rank or above living in Japan and working in the private sector. This is the third time the CSIS-Nikkei Virtual Think Tank has surveyed sentiment on Japan-China ties.

Some 75% said that entry by Chinese warships into the contiguous zone of the Senkaku Islands, is “a serious threat to Japan’s territory and waters.” Regarding the situation of the South China Sea where China is constructing artificial islands, 95% said “Japan should express its opposition.” Asked what they were concerned about when engaging in business in China, about 80% selected “political risks.”

Many were cautious about the future of the Chinese economy, with slightly less than 50% of pollees predicting that China’s growth rate in 10 years’ time would be “around 2–3%.” When asked the best strategy for Japanese companies doing business in China, a combined 55% called for either “withdrawal” (15%) or “cutting back” (40%) of China operations while only 8% suggested “expanding or developing” China operations and 37% said that China business should “remain unchanged.”

When asked which emerging economy their company would invest in today, 50% said India and 38% said ASEAN nations, while only 4% of respondents named China. With the political situation and economic slowdown in China, Japanese companies have clearly started to look for alternative destinations with an eye to dispersing the China risk.

Polling methodology: The survey was conducted from May 27 to June 8 by Nikkei Research Inc. of persons age 20 or over living in Japan and working at private-sector companies (regular employees of subsection-manager rank or higher). Responses were received from 2,827 persons. The breakdown by age group was as follows – 40s: 34% and 50s: 50%. After the survey was taken, a Chinese warship entered the contiguous zone of the Senkaku Islands. For this reason, from July 6 to July 12, a follow-up survey regarding the situation in the East China Sea was conducted of all respondents, and 2,032 responses were received. 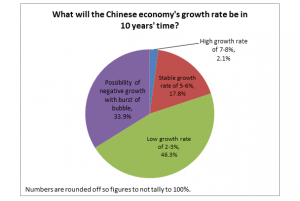 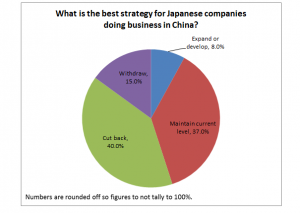 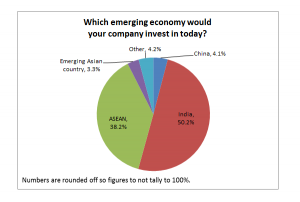 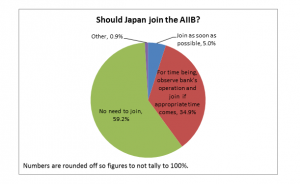 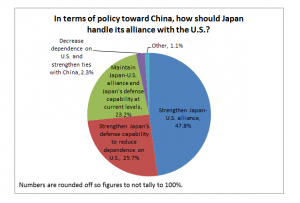 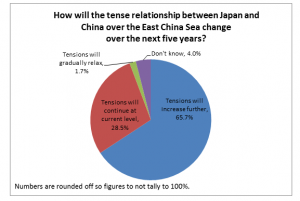