Who will become the leader of Tokyo? 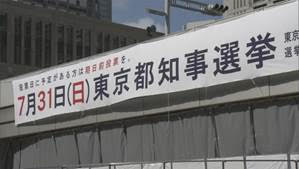 NHK’s “Close-up Gendai Plus” reported on the election for the governor of Tokyo, which has a population of 13.6 million and a budget of 13 trillion yen. The program said a record 21 candidates are running in the gubernatorial election. An NHK reporter said that since the last two governors were forced to step down due to scandals, this year’s election will be extremely important for the Tokyo government to regain public trust, adding that attention will be focused on voter turnout.