Former Defense Minister Yuriko Koike won the Tokyo gubernatorial election on Sunday. The following are the findings of the exit poll the Tokyo Shimbun conducted at polling stations in Tokyo to probe which candidate independents and the supporters of various parties cast their votes for and what voters were hoping for in making their selections.

Despite the fact that Koike did not have the backing or support of a political party, she attracted between 50% and 60% of the votes of LDP and Initiatives from Osaka supporters and slightly under 40% of the votes of Democratic Party supporters. Slightly less than 20% of Komeito supporters voted for Koike. Because Koike received more LDP votes than the LDP-backed Hiroya Masuda, as well as a sizable percentage of independent votes, she outdistanced other candidates. 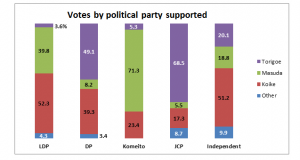 Respondents were asked which policies they would like the new governor to place priority on after taking office. The most frequent answer was “economy and jobs,” followed by “healthcare and nursing care,” “education and childrearing,” and “administrative and fiscal reform.” In seven of the eight policy categories, Koike was the top choice.

When asked what they placed the highest priority on in voting, the most frequent answers were the candidate’s “policies,” “character,” and “political experience.” (Abridged) 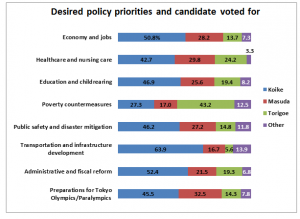 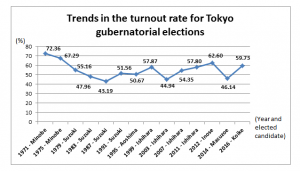 Polling methodology: The exit poll was conducted by Tokyo Shimbun at 60 polling stations throughout Tokyo Metropolis. Questionnaires were distributed to voters after they voted. Voters were asked to select their answers from a list of possible responses. A total of 2,623 men and women ranging in age from teens to 70s responded. Figures are rounded off to one decimal place.