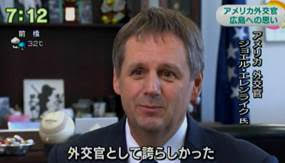 NHK reported Sunday morning on the major role played by U.S. Consul General in Naha Joel Ehrendreich in realizing President Obama’s visit to Hiroshima. The network said Ehrendreich objected for the first time 11 years ago to the long-held USG policy of not sending any representatives to the Hiroshima Peace Memorial Ceremony. Noting that many at the U.S. Embassy in Tokyo voiced opposition at the time by saying that the attendance would be accepted as an apology, the network said through his exchanges with the A-bomb survivors in Hiroshima, Ehrendreich was convinced that the hibakusha did not cling to the past. Ehrendreich was quoted as saying: “I was struck by how the hibakusha, the people of Hiroshima, were focused on peace today and peace for the future.”

The network said Ehrendreich kept suggesting to the State Department that the USG send a representative to the ceremony, adding that Ambassador Roos became the first U.S. representative to attend the ceremony in Hiroshima five years later. The network said he received an award from the government for making a courageous suggestion a year later, quoting Ehrenreich as saying: “I had planted a seed, helped to nurture a seed that grew up to be an idea that became our official policy. It made me proud to be an American diplomat at that point to see how our President, the Japanese prime minister, the people of Hiroshima all came together for a hope for a better world.”