60% of A-bomb survivor groups say “membership has dropped by half,” Kyodo poll

In a Kyodo News survey of the 43 member and observer organizations that make up the Japan Confederation of A- and H-Bomb Sufferers Organizations (Hidankyo), 27 organizations (over 60%) responded that “membership has shrunk to less than half of that at the time of the organization’s peak.” Moreover, some groups said that they are considering disbanding due to financial difficulties or a lack of people to serve as officers.

Hidankyo will mark its 60th anniversary on August 10. As of the end of fiscal 2015, the average age of persons carrying the official designation as hibakusha was 80.86. Although hopes are pinned on the increasing momentum to eliminate nuclear weapons with the visit by U.S. President Barack Obama to Hiroshima Peace Memorial Park in May, the survey revealed that it is becoming difficult for A-bomb survivor organizations to continue operation as the decline in membership remains unchecked.

The survey was conducted in person or by telephone in July of officers and others of the 43 organizations that make up Hidankyo, including the 42 prefectural organizations and a Hiroshima organization which participates as an observer.

Some organizations have already disbanded while Saga, Kumamoto, and Kagoshima report that they have considered doing the same in the past. The Ibaraki group said, “We are facing dissolution due to lack of funds” while the Gunma organization reported, “We have almost no activities anymore.” In contrast, the groups in Miyagi, Kyoto, and other prefectures said that they “will continue operations until the last person.”

Japan Confederation of A- and H-Bomb Sufferers Organizations (Hidankyo) is a nationwide hibakusha organization formed on August 10, 1956, at the Second World Conference against Atomic & Hydrogen Bombs, which was held in Nagasaki City in response to the U.S. hydrogen bomb tested at the Bikini Atoll in 1954. Under the catchphrase “No More Hibakusha,” Hidankyo has called for state compensation for victims of the A-bomb and the elimination of nuclear weapons. Hidankyo engages in activities in Japan and overseas to communicate the situation of hibakusha and also receives consultations from hibakusha regarding health issues. 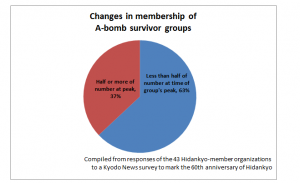 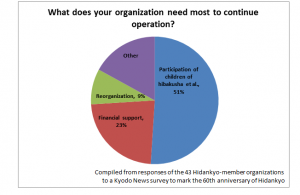