This morning’s Niigata Nippo reported that Ambassador Kennedy viewed the Nagaoka Fireworks in Nagaoka, Niigata, on Tuesday. The Ambassador reportedly thanked the local people for sharing the “magical celebration of peace, hope and friendship.” The paper said the fireworks in Nagaoka are held to console the souls of the victims of the Nagaoka Air Raid and pray for peace. The paper added that since the city launched fireworks at Pearl Harbor in Hawaii last year to commemorate the 70th anniversary of the end of the WWII, the Ambassador was invited to the event this year. The Ambassador reportedly delivered a speech at a city-hosted party before the fireworks, during which she said she had always wanted to see the fireworks in Nagaoka and hopes to learn about its desire for peace. Yomiuri’s regional edition reported online on the event, saying that the Ambassador said at the party that she hopes to pass on to the next generation the tradition of praying for peace through fireworks. 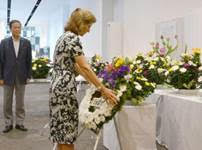 In a follow-up development this morning, Kyodo wrote that Ambassador Kennedy offered a wreath in memory of local citizens killed during WWII at a stand set up at the city office. The Ambassador reportedly told the press afterward: “[The Nagaoka visit] presented me with an opportunity to renew my dedication to peace.”