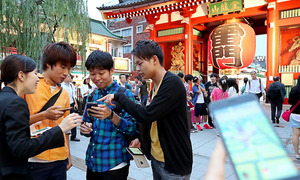 If you see people walking around town or in the countryside with their eyes glued to their smartphones these days, chances are they’re playing the smartphone game Pokemon GO. Following its launch in the U.S. and elsewhere on July 6, the augmented reality mobile app made its debut in Japan on July 22 and become an instant sensation. Chief Cabinet Secretary Suga was among those who commented on the smartphone game. He said during a press briefing on the day of the app’s release in Japan that he is very happy that content from Japan has become popular worldwide.

Pokemon GO is an app in which players use their smartphones to search for and collect Pokemon (pocket monsters), which come in hundreds of variations. Since the game uses augmented reality to make you feel like you’re capturing Pokemon in the real world, it’s attracting people who weren’t particularly interested in smartphone games in the past. However, in addition to excitement, this new style of gaming has brought anxiety and confusion to Japanese society. Because Pokemon GO players become so absorbed in their smartphones while searching for Pokemon, a number of incident 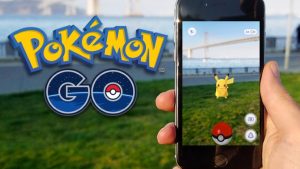 s such as trespassing and traffic violations have been reported since the app became available. Operators of nuclear power plants in Fukushima and elsewhere have asked the operator of Pokemon GO to delete information about their plants from the game in order to prevent players from accidentally entering the premises. The city government of Hiroshima has also asked the app operator to remove the Peace Memorial Park from the list of special locations for Pokemon GO players by August 6, when the annual peace memorial ceremony is held in the city, saying it should be a place for quiet prayer. Nagasaki made a similar request for the Atomic Bomb Museum.

However, there are also expectations among business circles and local governments that the immensely popular game 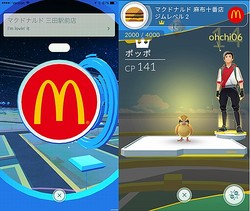 will have a positive economic impact. The term “Pokemonomics” has been coined to refer to the potential economic effects of Pokemon GO. Experts predict that Pokemon GO will help companies expand their business and local governments revitalize their communities. Keidanren Chairman Sakakibara has expressed hope that the smartphone game will revitalize the Japanese economy by boosting consumption. “Consumer spending on transportation and meals may grow if more people go out and travel to look for Pokemon,” said an economist at the Dai-ichi Life Research Institute. “The economic effects of Pokemon GO will be greater than those of computer games in the past.”

Indeed, the unique features of the game that require players to walk around outside in search of Pokemon have already led to increased convenience store sales of such items as portable phone chargers, sunscreen, and onigiri rice balls that can be eaten while walking around. In addition, McDonald’s Japan has forged a business tie-up with Pokemon GO in an effort to attract customers by distributing virtual tools that players can use to capture Pokemon at its approximately 2,900 outlets nationwide.

Governor Murai of Miyagi Prefecture said at a news conference on July 25 that although it is important for players of the game to abide by social norms, Pokemon GO may help bring more visitors to the prefecture, including areas that are still recovering from the Great East Japan Earthquake of 2011. In its endeavor to attract more visitors to the Tottori sand dunes, Tottori Prefecture has designated the dunes as a “liberated zone for Pokemon GO.” Governor Hirai said: “You can enjoy the game safely in the dunes because there are no obstacles there. I hope many children will come to the dunes during summer vacation. Lots of monsters are waiting for you!”