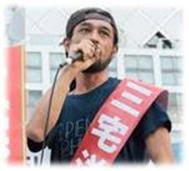 Singer Yohei Miyake surprised Japanese political professionals during the Upper House election campaign last month when he mobilized thousands of youths in his bid to get elected in the six-seat Tokyo district. Although he ended up ninth out of 31 candidates, the 37-year-old reggae musician managed to garner some 257,000 votes. Since the sixth-place winner captured almost 510,000 votes, Miyake’s record may not seem so impressive on the surface, but his unique campaign style commanded intense attention among young voters. His supporters occupied the open spaces in front of Shibuya, Shinjuku, and other major train stations when his campaign team organized what it called “Election Fests.” Miyake performed live and gave passionate speeches full of humor, compassion, love, and sometimes anger. Spectators were moved by his calls for peace and freedom that sounded natural and authentic, and his musician friends took part in the events as guest speakers. As a result, his name was Googled more times than any of the 30 other candidates, even more DP Acting President Renho, who took first place with over 1.1 million votes. 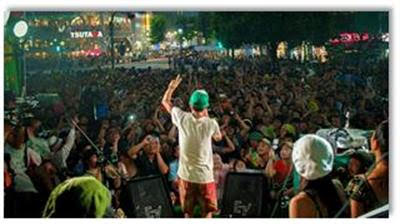 This was Miyake’s second bid to obtain a parliamentary seat after running unsuccessfully in the Upper House race in 2013. He chose to seek political office again in the belief that this could be his last chance to prevent the Japanese government from “running amok.” He was truly concerned that liberty would disappear in Japan if the Abe administration and pro-revisionist parties were allowed to control a two-thirds majority in both houses of the Diet to amend the Constitution. Miyake wanted to reach out to people who are not affiliated with any political party, don’t have special interests, and never vote. He said on the campaign trail: “You may think politics isn’t cool, but that’s not true. If you choose to stand up, you can change this country. You can unseat the government. Please put faith in the power of your vote.” He also said, “We are the 99%,” a political slogan widely used by the Occupy Wall Street movement several years ago to protest against social and economic inequality around the world. According to Mainichi (7/13), many young spectators donated 5,000 yen to 10,000 yen on the spot. One of them said: “I wasn’t interested in politics because political parties just seem to criticize one other. But after listening to Miyake’s speeches, I’ve come to realize that politics is no longer somebody else’s problem.”

Miyake’s campaign rhetoric included strong criticism of the LDP’s desire to alter the Constitution, calls for taxing the rich, a

nd demands for breaking away from nuclear energy. Although these ideas seemed to echo the views of opposition candidates, what made Miyake unique was not his political discourse per se. Tokyo University Professor Ayumu Yasutomi explained that Miyake’s bold actions resonated among young voters because they introduced new visions and possibilities to the “undemocratic” political atmosphere of Japan. “His call for a free society struck a chord with young people at a time when Japanese society is increasingly suffocating under the LDP administration,” said Yasutomi. “Many young people are yearning for the freedom to be themselves.” Pointing out that the musician received almost 80,000 more votes this time than in the previous election, Tokyo Institute of Technology sociologist Ryousuke Nishida said the Election Fests turned out to be useful tools for mobilizing politically indifferent young people. The expert on youth culture said Miyake’s supporters appeared to be more diverse in their p0litical orientation than those who attended the anti-security legislation rallies organized by SEALDs a year ago. “His political base is more solid than ever,” explained Nishida.

On the other hand, Adjunct Professor Takayuki Fujimoto of Toyo University expressed a more cautious view on the implications of Miyake’s political approach. While acknowledging the effectiveness of Election Fests as in raising political awareness among young people, the Japanese media analyst argued that since Miyake was able to collect only about half the number of votes garnered by the winner of the sixth seat in the district, some young people probably only attended Miyake’s outdoor rallies to join in the fun. 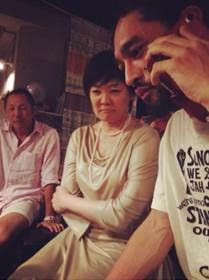 ake is determined to continue his political crusade in the face of his detractors and two consecutive election setbacks, because he understands that like supporters of Bernie Sanders, many of his followers experience a shared collective undertaking for the first time by pouring their energy into the political campaign. In his remarks acknowledging his defeat late Sunday night on July 10, Miyake said: “I would like to continue my quest to reach more voters because I’m confident that a new political force is emerging. I want to capitalize on the support I received in the latest election to help elect my comrades in local legislatures.” Interestingly, Prime Minister Abe’s wife Akie (left), who disclosed that she met with Miyake after the election, said on Facebook, “I now understand why so many people root for him so passionately.”