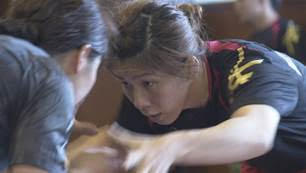 NHK’s “Close-up Gendai Plus” reported on Wednesday evening on Japanese female wrestler Saori Yoshida, who has won 203 consecutive bouts and 13 consecutive world championships, and is aiming to achieve an unprecedented fourth consecutive victory in the women’s 53-kg freestyle class at the Rio Olympics. The program said, however, that as Yoshida grows older, she has had to change her grappling style.