59% say their hopes for Abe cabinet have not changed with reshuffle, Mainichi spot poll

With Prime Minister Shinzo Abe’s third reshuffle of his cabinet, the Mainichi Shimbun conducted a nationwide spot public opinion poll on Aug. 3–4. When asked if their hopes for the Abe cabinet increased with the reshuffle, 59% of pollees said that their “hopes have not changed.” Some 23% said that they “cannot have hope” in the new cabinet while 10% said that their “hopes have increased” with the reshuffle. Respondents were also asked for their views on extending the term of PM Abe as LDP president. His term currently ends in September 2018. Some 53% said “it is not necessary to extend his term” while only 36% said that “it would be good to extend his term.” The cabinet support rate rose to 47%, up 3 percentage points from the previous poll conducted July 16–17, while the nonsupport rate dropped by 1 point to 34%.

The appointment of former LDP General Council Chairman Toshihiro Nikai to LDP secretary-general failed to meet the approval of 41% of pollees, while 35% approved of the personnel choice. Among LDP supporters, however, 59% gave the appointment a thumbs-up.

Some in the LDP are calling for the term of Shinzo Abe as LDP president to be extended. Over 60% of cabinet supporters and of LDP supporters said they approve of extending his term.

Former Minister in Charge of Overcoming Population Decline and Vitalizing the Local Economy Shigeru Ishiba declined Abe’s invitation to remain in the cabinet. Asked if they have hopes for Ishiba, who is seeking to be the next prime minister, 49% of respondents said “no” while 34% said “yes.” The spread is smaller among LDP supporters with 46% saying “no” and 40% saying “yes.” 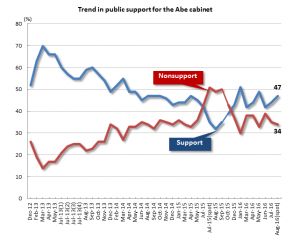