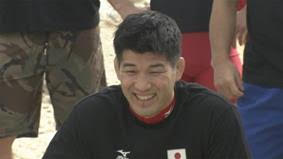 Thursday evening’s NHK “Close-up Gendai Plus” reported on the Japanese men’s judo team, which failed to win a single gold medal at the London Olympics. The team is now led by manager Kosei Inoue, who won a gold medal at the Sydney Olympics. Inoue has carried out drastic reform, including recruiting a body builder as a coach to build up the wrestlers’ strength, and incorporating martial arts of various countries.