In the opinion poll jointly conducted by the Sankei Shimbun and Fuji News Network (FNN) [on Aug. 6–7], the support rate for Prime Minister Shinzo Abe and his cabinet was 55.4%, up 5.6 percentage points from the previous poll conducted July 16–17 and exceeding 50% for the first time in three months. The nonsupport rate dropped by 6.0 points to 33.1%.

Only 40.4% of pollees said that they “approve” of the reshuffled cabinet, Abe’s third, while 42.1% said that they “do not approve.” When asked their impression of the cabinet, many gave harsh evaluations, indicating that “the cabinet offers nothing new” (29.0%) or “some of the ministers seem likely to need to be replaced soon” (13.4%).

Some 49.8% said that they “do not approve” of the appointment of Tomomi Inada as defense minister. When respondents were asked, though, which minister they have high hopes for, Inada ranked first at 10.1%. Pollees were also asked how long they wanted Shinzo Abe to continue as prime minister. More than 70% said either “as long as possible” (21.4%) or “for a while longer” (54.7%), easily exceeding those saying, “I would like to see him step down as soon as possible” (21.5%).

When asked about the Democratic Party presidential race (scheduled for Sept. 15), some 32.2% said Democratic Party Acting President Renho was the most appropriate person for the position, giving her a substantial lead over the second most frequently selected candidate, former Foreign Minister Seiji Maehara (7.5%). Some 31.4%, however, indicated “not interested and anyone will do.”

Looking at political party support, 39.9% said they support the Liberal Democratic Party, up 4.6 percentage points from the previous poll. Support for the following parties [among others] declined – Democratic Party, 9.9%; Komeito, 4.9%; Japanese Communist Party, 4.1%; Initiatives from Osaka, 4.5%. 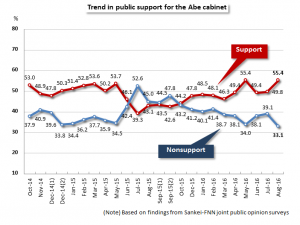