In the extraordinary Diet session in the fall, the government will try to have the Diet ratify the Trans-Pacific Partnership (TPP). When enacted, the TPP will abolish most of the tariffs on industrial products and remove around 80% of the tariffs currently imposed on agricultural imports.

One of the examples of successful overseas expansion is seen in the case of Dassai, a sake label produced by Asahishuzo Co. in Yamaguchi Prefecture. The company started exporting sake in 2005 and now sells 10% (500,000 liters) of the sake it produces annually to destinations such as the U.S., China, and Hong Kong. The profit from exports alone amounts to one billion yen per year. Vice President Kazuhiro Sakurai says the company plans to increase exports to 50% of its production in the future.

The internationalization of the Dassai brand has boosted the regional economy through increased production by young farmers of a type of rice used for the sake. The vice president says, “Rather than competing with each other over the shrinking domestic market, exporting overseas to expand our market will be the key to revitalizing Japanese agriculture.”

In Hokkaido, an agricultural cooperative in Obihiro City started exporting Chinese yams in 1999. Exports have now reached 3,000 tons, which constitutes 10-15% of annual production. Here again, increasing the production of yams through successful exports has benefited area farmers in the form of higher income. (Abridged) 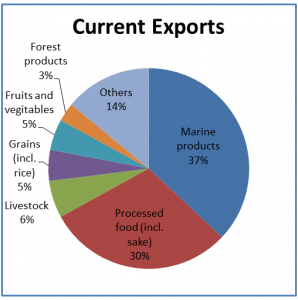