Japanese corporations are focusing more on expanding research and development capabilities at home than abroad in fiscal 2016 as they seek new partnerships in artificial intelligence and other cutting-edge fields, a Nikkei survey shows.

Roughly one in four companies, or 24.3%, have plans to build or expand R&D facilities in Japan this fiscal year or later, five points more than those having similar plans abroad.

Many Japanese businesses have come to embrace open innovation, or partnerships with external actors, as they seek to put such cutting-edge technology as artificial intelligence and regenerative medicine to practical use. They are eager to team up with domestic institutions. Universities, for their part, aim to use corporate ties to supplement research funding. 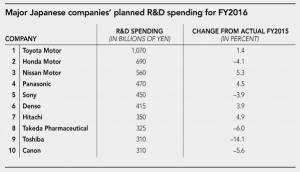 Toray Industries will invest about 10 billion yen to build a new R&D facility in Shiga Prefecture as early as next year. The location, likely to become the fiber maker’s largest domestic research hub, will serve as the base for partnerships with external actors. While bolstering output capacity abroad, the company will consolidate cutting-edge research operations at home.

Hitachi Metals opened a research center for superalloys in Ibaraki Prefecture in partnership with the National Institute for Materials Science. It aims to apply the metals to jet engines and gas turbines for power plants. Commercialization is targeted at the end of fiscal 2018.

Chugai Pharmaceutical formed a partnership with Osaka University on immunology and cancer treatment research. Hitachi is conducting joint research with the University of Tokyo and two other universities in AI and other fields.

Spending growth is slowing in many industries, including the machinery, engineering and shipbuilding sector and the automotive sector. In the food, pharmaceutical and biotech sector, spending is shrinking for the first time in seven years. Takeda Pharmaceutical is planning a 6% decrease and Daiichi Sankyo a 8.9% drop after having seen research costs balloon from large-scale clinical trials of new drugs.

While many companies are still planning large investments, they are growing more selective in where to put that money. Takeda is closing its research facility in the U.K. under plans announced in July to consolidate R&D operations in Japan and the U.S.

Sony is revising its lineup of image sensors amid a slowdown in the smartphone market. Even Toyota Motor, which has set aside a record R&D budget this fiscal year, is streamlining spending at each of its in-house companies set up in April.

Overall spending is growing more slowly but not shrinking. R&D spending five years from now will represent an increase of at least 10% compared with fiscal 2015, according to 22.3% of respondents in the survey.

Of those planning to boost spending this fiscal year, 23% are planning to expand existing businesses or enter a new field. AI was an especially popular field, with 59.3% of respondents showing an interest.