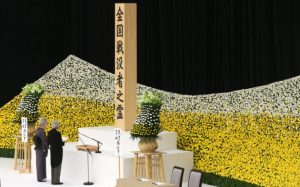 NHK broadcast live from 11:50 a.m. the GOJ-sponsored ceremony held in Tokyo to mark the 71st anniversary of the end of WWII. The ceremony was attended by Emperor Akihito and Empress Michiko along with about 5,000 family members of the war dead. Prime Minister Abe stated in his address: “Consistently since the end of the war, Japan has assiduously walked the path of a country that abhors war and values peace…. We will never again repeat the devastation of war. Remaining committed to this resolute pledge and humbly facing history, we will continue to contribute to world peace and prosperity while making every effort to bring about a world in which all people can live in a way that is rich in spirit.” NHK reported in its noon news that Abe visited Chidorigafuchi National Cemetery and offered flowers there ahead of his participation in the ceremony.

All commercial networks led with updates on the Rio Olympics, including reports that Jamaica’s Usain Bolt won a gold medal in the men’s 100 meter for the third straight time in the Olympics.