On Aug. 13, Kyodo News announced the results of its poll of 108 major Japanese companies. Some 60 firms, or 56%, said they think the economy will be “flat” at the end of this year, easily surpassing the 35 firms who expected a “moderate expansion.” Meanwhile, nine firms projected a “moderate slowdown.”

When asked why the economy would remain flat or slow down (multiple responses permitted), 44 companies cited delay in the recovery of consumer spending. Other frequent responses included the strong yen and the effects of Britain’s decision to leave the European Union.

Despite the fact that the Abe administration recently approved an economic stimulus package worth 28.1 trillion yen, the survey results indicate Japanese companies are taking a cautious approach on their future business.

When asked what economic steps they want the Abe administration to introduce (multiple responses permitted), 44 companies, or 41%, said they hope the government will carry out “deregulation,” 43 firms called for “social security system reform and fiscal rehabilitation,” and 36 firms sought “measures to stabilize the currency market.” Some 24 companies said “other,” with many citing revitalization of the regional economy.

As the population of Japan is expected to continue to decline in the future, companies have high hopes about hiring foreign workers. Many companies are engaging in recruiting without regard to applicant nationality, and some suggest calling on the government to enhance the environment for accepting foreign workers. Many of those surveyed also said they are proactive in engaging women and older persons.

The poll was taken from mid- to late July. 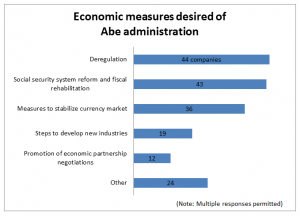 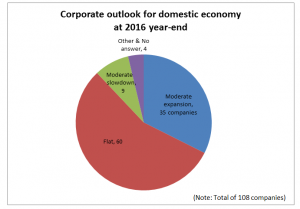