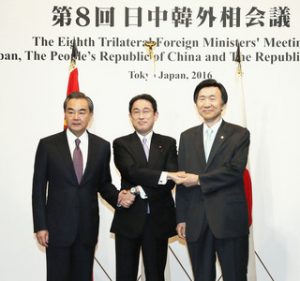 All papers wrote that Chinese Foreign Minister Wang Yi arrived in Tokyo on Aug. 23 to attend a trilateral meeting with his Japanese and South Korean counterparts. This is first time for a Chinese foreign minister to visit Japan since the launch of the Xi administration in 2012. Wang told reporters upon his arrival at Haneda on Tuesday evening that although there have been many media reports about the East China Sea, half of them are intentionally stirring up the issue. However, Wang added that China will prevent the situation from deteriorating through dialogue with Japan. Asahi wrote that Wang feels strong dissatisfaction with Japan’s continued calls on Beijing to accept the international arbitration ruling on the South China Sea in July.

The papers wrote that the Japanese and Chinese foreign ministers apparently held informal talks after a dinner hosted by Kishida for Wang and their South Korean counterpart Yun Byung Se on Tuesday, speculating that Kishida and Wang discussed bilateral issues, including the Senkaku Islands.