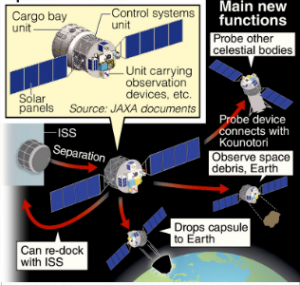 The Japan Aerospace Exploration Agency’s next-generation “Kounotori,” an unmanned transfer spacecraft for carrying supplies to the International Space Station (ISS), will be a multipurpose model that can do other tasks in space.

JAXA aims to use parts of the next-generation Kounotori spacecraft as, for example, satellites after it completes its mission for the ISS.

With an eye on future space development, including manned probes to the moon and Mars, JAXA significantly reviewed the conventional functions of the spacecraft, which has previously been disposable.

JAXA plans to have the next-generation Kounotori fly in space on its own and carry observational devices.

The agency intends to spend ¥35 billion to develop the spacecraft and aims to launch the first one in fiscal 2021.

After their transportation missions, past Kounotori spacecraft carried used clothing and other waste from the ISS and dropped them into the Earth’s atmosphere where they burned.

According to JAXA, the next-generation model currently in design — dubbed HTV-X — will be able to separate control systems units such as engines from its main body after docking at the ISS.

The engines will be equipped with observational devices so the spacecraft can leave the ISS and orbit as a satellite.

After that, the spacecraft itself will be used as an Earth observation satellite or to monitor space debris, which includes pieces of broken satellites. It will also be able to re-dock with the ISS.

JAXA is considering adding other functions, including for returning capsules containing experiment samples to Earth and connecting the spacecraft with a probe device to depart for other astronomical objects.

The U.S. National Aeronautics and Space Administration (NASA) is proceeding with a plan to send astronauts to Mars in a space probe in the 2030s.

JAXA staff member in charge said, “We’ll give the next-generation spacecraft a wider range of functions so that it can respond to plans other than those related to the ISS.”