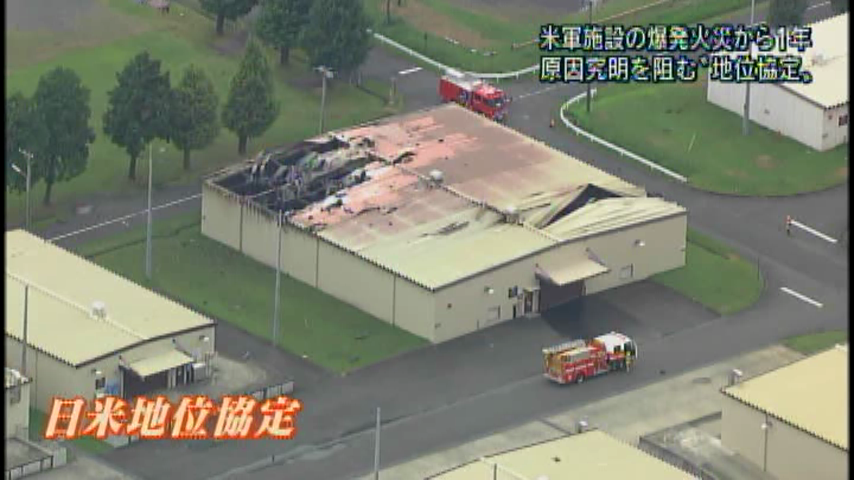 TV-Asahi’s “Hodo Station” carried an 8-minute report last night on the U.S. military’s continued failure to inform the Japanese side of the cause of an explosion and fire that occurred a year ago at Sagami General Depot, Kanagawa Prefecture, emphasizing that the SOFA apparently impedes local authorities’ investigation of the cause of incident. According to the broadcaster, the U.S. military later told the Japanese side that the explosion may have been triggered by canisters of compressed oxygen and other gases, and that these canisters were removed from the site for safety reasons. Although local officials have been strongly demanding full accountability for the accident in view of local residents’ lingering concerns, no updates have been provided by the U.S. military since January this year. Kanagawa Governor Kuroiwa explained that local requests for access to the facility for investigation and demands for relevant information have not been heeded because the exact cause of the fire is perhaps categorized as a “defense secret.” While noting that the U.S.-Japan Joint Committee meets regularly to discuss issues and problems related to the U.S. military, the broadcaster said that the GOJ should demand SOFA revision so that at least the minutes of the bilateral meeting become available for public scrutiny.

Wednesday’s Tokyo Shimbun ran an extensive report on the same issue, saying that the area’s residents are concerned because they have not been informed of the cause of the explosion. A man who lives about 300 meters from the depot told the paper that  he was afraid to go outside immediately after the explosion from fear of scattered wreckage. He added that the results of the U.S.’s unilateral investigation alone are not enough to allay his fear. The Sagamihara Fire Department was not allowed to inspect the site until three days after the explosion. Sagamihara Mayor Kayama expressed frustration at the lack of follow-up reports from the U.S. side in a regular press briefing on Aug. 23 by saying: “It’s taking too long. We could come up with preventive measures and provide local residents with appropriate information if we were involved in the onsite investigation.”