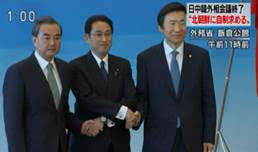 NHK reported this afternoon that FM Kishida announced a joint statement together with his Chinese and South Korean counterparts after the trilateral talks in Tokyo and said the ministers confirmed that Japan, South Korea, and China will lead efforts by the UNSC and the international community to strongly urge North Korea to refrain from taking provocative actions and abide by UNSC resolutions. The network said the three ministers also agreed during the talks to cooperate toward holding a trilateral summit by the end of this year in Japan.