At odds over Senkakus, Japan and China agree to reduce tensions 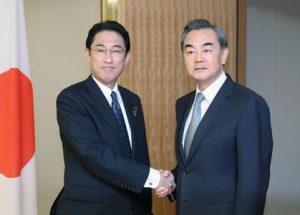 All papers gave front-page play to talks between Foreign Minister Kishida and his Chinese counterpart Wang on the sidelines of a trilateral meeting with their South Korean counterpart Yun on Aug. 24 in Tokyo. Kishida renewed Tokyo’s protest against Chinese activities near the Senkaku Islands in the East China Sea, while Wang reiterated Beijing’s claim over the Senkakus. However, they agreed on the need to make efforts to improve bilateral relations, including launching a maritime and aerial communication mechanism at an early date to avoid unforeseen incidents in the region and prevent the situation there from deteriorating further. The two nations also agreed to make arrangements for a bilateral meeting between Prime Minister Abe and President Xi on the sidelines of a G20 summit to be held in China on Sept. 4-5. Both Japan and China expressed willingness to make efforts to improve their ties because they need to cooperate in making the upcoming G20 summit a success and realizing a trilateral summit with South Korea in Tokyo in November or later.

In a related move, the GOJ sent Shotaro Yachi, the secretariat head of the National Security Council, to Beijing on Wednesday for talks with Chinese State Councilor Yang Jiechi. The two diplomats will discuss arrangements for a meeting between Prime Minister Abe and President Xi on the margins of the G20 summit. NHK aired a similar report this morning, adding that Yachi is expected to call for China’s cooperation in holding a trilateral summit between Japan, China, and South Korea by the end of this year, request China exercise restraint in the East and South China Seas, and ask China to play an active role in urging North Korea to refrain from taking provocative actions.