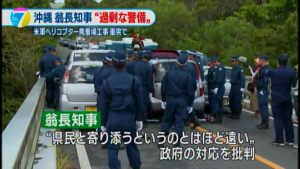 Ryukyu Shimpo front-paged a report on a news conference on Aug. 25 by Okinawa Governor Onaga, during which he commented on the continued conflict between local protesters and riot police at the helipad construction site in the Northern Training Area by saying the mobilization of 500 to 800 riot police is “excessive.” When asked about the mobilization of riot police from outside Okinawa at the request of the Okinawa Public Safety Commission, the governor said it is regrettable. Onaga criticized the GOJ for resuming construction on the day after the Upper House election on July 10, saying that it runs counter to the GOJ’s policy of holding dialogue with the people of Okinawa. The governor reiterated the prefecture’s request for the cancellation of the deployment of Ospreys at the training area, saying that the relationship of trust with the GOJ will be questioned if Tokyo fails to provide a detailed explanation. NHK’s “News 7” and TV-Asahi’s “Hodo station” on Thursday evening briefly reported on Onaga’s remarks.