An agreement to adopt a Japanese proposal to limit the number of mackerel boats has been reached at an international meeting to discuss protecting fishery resources in the northern Pacific Ocean.

However, questions about the agreement’s effectiveness remain because of strong objections from China, which is trying to grow its domestic fishing industry.

The Japanese government sees the agreement, which was adopted Friday, as the first step in protecting mackerel resources. It intends to continue working with other parties to strengthen regulations, though it is unclear if this will prove successful.

The North Pacific Fisheries Commission first met last year at the request of the Japanese government. The other participants are China, Canada, Russia, South Korea and Taiwan.

Regarding mackerel, the talks resulted in an agreement that included a recommendation not to increase the number of fishing vessels, and a plan to survey matters such as the amount of resources in the near-term.

The Japanese government was initially hoping to clearly oblige each country and region not to increase their number of mackerel vessels more than now, but the final agreement stopped at the weaker “recommendation.”

The agreement is not enforceable, and one possible loophole remains whereby using larger boats would allow for bigger catches without increasing the number of boats.

How effective will it be?

The Japanese government’s desire to strengthen regulations on mackerel fishing is in response to rapidly increasing catches by Chinese vessels in international waters.

However, 20 Chinese mackerel boats operated in international waters in the northern Pacific adjacent to Japan’s EEZ in 2014. 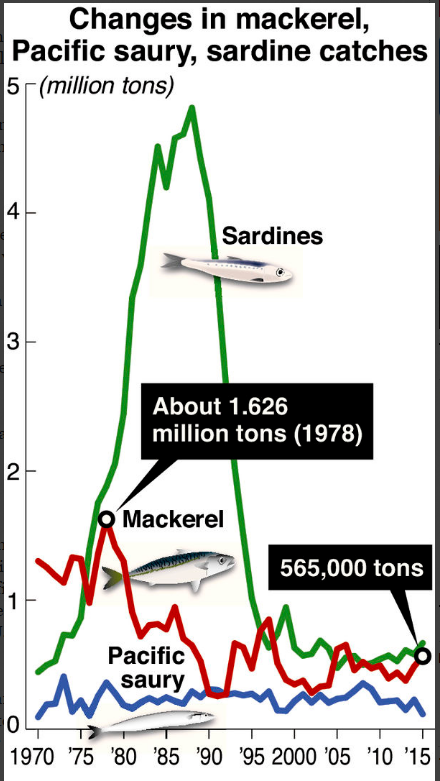 Nations are free to operate in international waters as they please, but the Fisheries Agency is worried about a negative effect on the Japanese fishing industry if Chinese boats continue to overfish in waters close to good fishing grounds in Japan’s EEZ.

To manage mackerel resources, the Japanese government limits the total mackerel catch by domestic fishermen to 822,000 tons per year.

According to the Chinese society of fisheries science, China’s mackerel haul for 2015 was 470,000 tons, or about the same as Japan’s catch.

Chinese people do not eat mackerel regularly, but salt-grilled mackerel at Japanese restaurants and sushi establishments has become popular.

China’s expanded operations in international waters in the northern Pacific are seen as part of efforts to fill its giant “stomach.”

A source said China feels that regulations do not need to be strengthened when it is still unconfirmed that the mackerel population is decreasing.

This indicates that the Chinese government does not have the same sense of crisis about managing fishery resources as the Japanese government.

The final agreement appears to be a compromise between Japan and China. This leaves Japan with the problem of how to ensure China will abide by it.

An area of sea located outside a country’s territorial waters (within 12 nautical miles of the coast) that extends 200 nautical miles (about 370 kilometers) from the coast. Countries have preferential rights to develop marine and other natural resources within their EEZ, but vessels from any nation are free to pass through them.