According to the Nikkei Inc./TV Tokyo public opinion poll conducted on Aug. 26–28, the support rate for the Abe cabinet rose to 62%, up 4 percentage points from the finding in the poll implemented Aug. 9–11. This is the first time for the cabinet support rate to climb to the 60% level since the poll taken right after the September 2014 cabinet reshuffle. The nonsupport rate was 27%, down 5 points from the previous survey. The administration may have been bolstered by the public’s high expectations for the 2020 Tokyo Olympics after the excitement of the Rio de Janeiro Olympics, the closing ceremony for which Prime Minister Shinzo Abe attended.

The telephone poll was conducted on Aug. 26–28 by Nikkei Research Inc. of men and women, aged 18 and over, nationwide on a random digit dialing (RDD) basis, including cell phones [as well as landlines]. A total of 1,055 valid responses were received for a response rate of 47.0%. 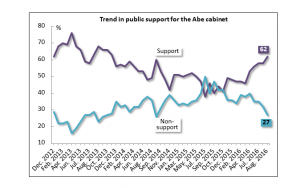