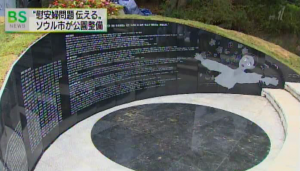 All papers wrote that an opening ceremony was held on Monday in Seoul for a park honoring the former comfort women, noting that several victims, the Seoul mayor, the leader of the largest opposition party, and others took part in the event. They expressed strong opposition to the comfort women accord between the GOJ and the South Korean government, stressing that they will never allow the comfort women statue to be removed from in front of the Japanese Embassy.

NHK-BS1 also carried a similar story this morning, saying that although South Korean government officials are saying that the park could be a possible site for the relocation of the comfort women statue in front of the Japanese Embassy, civic groups remain opposed to the removal or relocation of the statue.