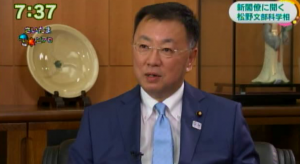 NHK reported this morning on its exclusive interview with newly appointed Minister of Education, Culture, Sports, Science and Technology Matsuno. The network said Matsuno has been consistently engaged in education policy since he was first elected 16 years ago, adding that he is planning to introduce grant-type scholarships to reduce the financial burden on households. Matsuno was quoted as saying: “The government has already decided to formulate grant-type scholarships in the budget for FY2017. In order to realize these scholarships, we need to resolve the issue of financial resources, so we need to work with the Finance Ministry. We would like to work on reducing the financial burden on households of school tuition from kindergarten to university so that children will not be deprived of opportunities to receive education of account of their family situation.”

He also pointed out that the long hours teachers are forced to work are problematic from the viewpoint of sustainability and stressed the need to increase the number of teachers and have other school staff share the burden. Concerning the declining global competitiveness of Japanese universities, Matsuno stressed the need for improvement, saying it is necessary to promote the globalization of universities and improve their research environment. He said that his biggest task will be to improve the level of Japan’s educational institutions.