Veteran politician Toshihiro Nikai of the Liberal Democratic Party (LDP) was appointed the party’s Secretary General in the reshuffling of party executives at the beginning of this month. Nikai, who is known as “the last party politician,” talked to Yomiuri Shimbun about the issue of Prime Minister Abe’s term extension as LDP president, and the issue of how to tackle constitutional reform. 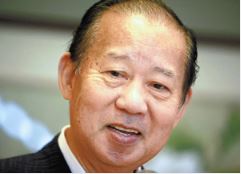 Q: Some are calling for an extension of Prime Minister Abe’s term as the LDP president. According to the LDP constitution, however, his term expires in September, 2018. What is your opinion on this?

A: We had a number of short-lived administrations in succession. Under Prime Minister Abe, we are experiencing a long-term, stable administration. Rather than meddling with this stability with a general election and a change in leadership, I think political stability is important for the government at this time. We have important challenges, such as fiscal issues, that require our attention. It is desirable to have a stable political environment. I look forward to internal party discussions on the subject.

Q: LDP vice president Masahiko Komura supports institutional reform instead of implementing a special measure. That would mean revising the party rules so that the president can stay in the job for three terms, or nine years, instead of two terms, or six years.

A: I think that is a good suggestion also. We should discuss that option, too. Right now, the talk about the term extension naturally focuses on Prime Minister Abe, because he is the incumbent party president. But it is not an issue particular to PM Abe. I think it is a good idea to lay the groundwork for a stable administration.

Q: Do you mean the party should consider institutional reform, rather than a special measure?

Q: Revisions to the LDP constitution are made in the party convention. Are you planning to propose any revisions at next year’s convention?

A: We will ask for discussion of the issue to start soon. I don’t have a schedule planned from start to finish. It would be good if we could prepare it (in the party convention).

A: We have carefully maintained a peace constitution for a long, long time in its current form without any revision. I think that is of great significance in itself. But opinions exist that support revisions on some parts of the Constitution. If an increasing number of Japanese call for revision, I think we can seriously consider the issue and deal with it fairly. However, I don’t think it is a good idea to just rush into Constitutional revision. I think we should take a steady, slow, level-headed approach.

Q: Even if you propose constitutional reform to the Diet, it may be rejected in a national referendum. If that happens, reform may become impossible in the future.

A: It may stall any further initiatives. I believe in an unhurried and steady reform process without overzealousness.

Q: In reality, the LDP needs cooperation from Komeito members, as well as from part of the opposition camp.

A: Komeito members firmly support upholding the Constitution in its current form. Needless to say, we must very clearly lay out our case beforehand in order to obtain their understanding. We want to avoid upheavals in the Diet like steamrolling the bill. It is crucial not to be hasty. We have to be deliberate. And we must make efforts to gain the understanding of as many Japanese citizens as possible. We must make a considerable effort in our everyday activities.

Q: We understand that PM Abe says that he will not submit the Constitutional reform draft in its present form.

A: I think a majority of the party members agrees with him. The current reform draft was formulated when Mr. (Sadakazu) Tanigaki was the secretary-general. We hope he recovers quickly and weighs in on the issue.

Q: Have you heard from the former secretary-general?

A: We sincerely hope for his swift recovery. We have not heard any concrete opinions from him, but he sent me a gift of wonderful wine and wished me good luck. I have set it on my table. I appreciate his consideration, and I will keep his best wishes in mind.

“There is no ‘equation for victory’ in elections”

A: It is a bit premature [to talk about the lower house election.] We only just finished the upper house election. But of course, the lower house election is what’s next on the agenda and every party has begun its preparations. The LDP has a lot of young Diet members. There are 120 first- and second-year members. We must tread carefully and act consciously in the formulation of an election strategy. Otherwise, we will not be able to come back to the national stage. I believe my faction’s summer workshop in Hokkaido will dedicate a large amount of time to our election strategy. Without winning elections, you will not be able to work in politics. In the Tanaka faction that we belonged to, our focus was first and foremost on elections. When the Diet was dissolved, we focused on winning the election and coming back. There is no “equation for victory,” so it is crucial that we always keep elections in mind.

A: (Ruling parties) are not allowed to be arrogant. As a means of self-restraint, I will strive as much as possible to think while standing in the other party’s shoes. I never dreamed of becoming a secretary general. I know my role, as well as my abilities and my limits. I will strive to do my best for the sake of the party. No more, no less.

Q: At the LDP convention, author Ayako Sono said, “Die for your country. If you cannot do that, don’t be a politician.” I heard these words have stayed with you.

A: A genuine politician should believe these words. Many politicians say that they will put their lives on the line to conclude this international negotiation, or to solve that domestic problem. In politics, it is important that you have the resolve that comes from believing that you will stop at nothing to achieve something, even if you must sacrifice your life for it. That’s not what I say to everyone, but we need that kind of earnestness. We have much to do. I don’t expect to have a single easy, relaxing day ahead of me. But I put all that I have into this job and always try to do my best.