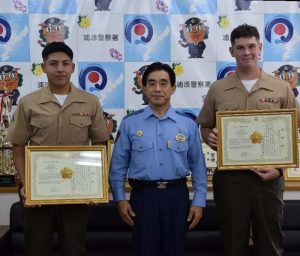 Okinawa Times reported on Tuesday that the Urasoe Police Station presented letters of appreciation to two U.S. Marines stationed at Camp Kinser on Aug. 23 for putting out a vehicle fire on National Route 58 on April 16. The paper said Marine Cpl. Ian Burnham and Lance Cpl. Luis Rosas received the letters from Urasoe Police Chief Sakihara, who expressed appreciation by saying they took “prompt action.” According to the daily, the two Marines put out the fire using extinguishers before the police arrived at the scene.