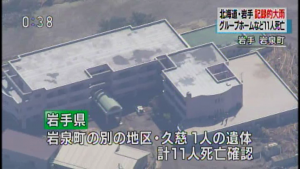 All broadcasters gave extensive top play to reports that nine bodies were found this morning near a nursing home in Iwaizumi, Iwate Prefecture, following the flooding of a nearby river after powerful Typhoon Lionrock hit the region. According to NHK, a total of 11 people died in Iwate, and three people are missing in Hokkaido, which was also affected by the typhoon.