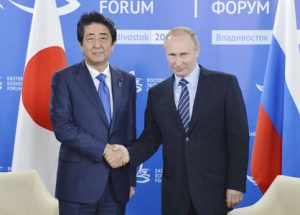 All Saturday morning papers reported heavily on the summit between Prime Minister Abe and Russian President Putin in Vladivostok on Friday, during which they agreed to meet again in Peru in November on the margins of the APEC leaders’ meeting and in Yamaguchi Prefecture on Dec. 15 in order to accelerate talks on the Northern Territories dispute. Following the summit over dinner, which included an hour-long private session, the prime minister told the press that they held “in-depth discussions” on a peace treaty. During the summit, the premier reportedly outlined a package of economic assistance measures for Russia based on the bilateral accord reached in May on taking a “new approach” to peace talks. They also agreed to launch a bilateral consultation panel to promote energy cooperation.

Asahi said Abe appeared to be extremely anxious to resolve the decades-long territorial dispute by using economic assistance as leverage in order to leave a diplomatic legacy based on the judgment that the development of the Russian Far East is President Putin’s top policy priority. According to Yomiuri, the GOJ is hoping to achieve a breakthrough in the upcoming summit in December based on the assessment that during the transition to the next administration, Washington probably will not be critical of growing reconciliation between Tokyo and Moscow.

Russia, on the other hand, is apparently desperate to obtain economic cooperation from Japan. Putin has intensified his overtures toward Japan with the goal of ending Russia’s diplomatic isolation over the situation in Ukraine and offsetting its growing economic dependence on China. Pointing out that the Putin administration has steadily taken steps to cement its control over the four disputed islands, Sankei expressed concern that Russia may obtain economic aid from Japan without offering anything in return. According to Nikkei, some Japanese companies are afraid to deepen their business involvement with Russia in view of the possibility of the U.S. reacting negatively. The paper also said Japanese business leaders are wary of undertaking major business deals with Russia in response to pressure from the government.

In a related story, Tuesday’s Yomiuri highlighted press remarks in Hangzhou on Monday by President Putin, who said the sanctions that the GOJ is enforcing on Moscow over the situation in Ukraine “will not disrupt Russo-Japanese relations.”