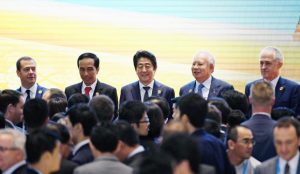 All papers front-paged reports on the East Asia Summit held in Vientiane on Sept. 8, during which Prime Minister Abe stated that Japan hopes relevant parties will comply with the July arbitration ruling on the South China Sea and that China will keep the promise made by President Xi last year not to militarize the region. President Obama also urged Beijing to abide by the arbitration ruling by saying that it is binding. However, most of the other participants in the summit did not refer to the ruling and stated that the disputes should be resolved by the rule of law. Chinese Premier Li rejected the calls from the U.S. and Japan, saying that territorial disputes should be resolved between the concerned parties.

Asahi wrote that although the South China Sea was a key issue in the East Asia Summit and the U.S. repeatedly stressed the importance of the rule of law, Washington failed to present specific steps to stop China’s militarization of the region. The paper speculated that Beijing might take a hardline stance during the transitional period in the U.S. after President Obama’s term ends in January.

Yomiuri wrote that it became clear at the East Asia Summit that the strategy of the U.S. and Japan to form a coalition against China with their ASEAN partners has run into difficulty because many of the participants avoided taking clear positions on the South China Sea. Nikkei expressed a similar view, saying that Washington and Tokyo are running out of options to put pressure on China.