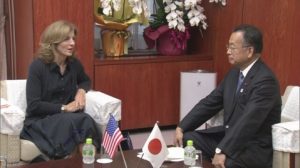 NHK reported on its website on Thursday evening that Ambassador Kennedy made a courtesy call on Minister for Agriculture, Forestry and Fisheries Yamamoto on Thursday at MAFF. In response to Yamamoto’s remark that Japan will seek Diet approval of the TPP at the extraordinary Diet session to be convened on Sept. 26 in order to swiftly ratify the treaty, the Ambassador reportedly said that although there are many views about the TPP, she believes that the treaty will be approved because it is a matter of highest priority for the Obama administration.

Kyodo News (English) also reported on the Ambassador’s meeting with the farm minister, saying that the two officials affirmed their countries’ readiness to ratify the TPP agreement at an early date. According to a ministry official who was present at the meeting, Yamamoto told the Ambassador that he will make utmost efforts to achieve the early ratification of the Pacific free trade pact.