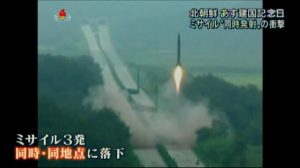 TV-Asahi “Hodo Station” reported on Thursday that Japanese defense officials are alarmed by the rapid advancement of North Korea’s ballistic missile capabilities, as the three projectiles that were launched on Monday were apparently guided accurately to land in the same area in the Sea of Japan at the same time. A retired MSDF general emphasized that Japan’s four Aegis warships equipped with SM-3 interceptors would not be able to detect and shoot down North Korean missiles if they were fired simultaneously in large numbers from mobile platforms. He said enhancing missile defense coordination with the U.S. and South Korea is imperative.