Hiroshima Toyo Carp on its way to victory 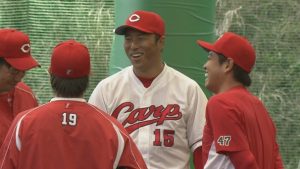 NHK’s “Close-up Gendai Plus” on Thursday reported on Japanese professional baseball team Hiroshima Toyo Carp, which is on the verge of winning its first Central League pennant in 25 years. The program reported on how the team, which began as a citizens’ team with no corporate sponsorship, transformed itself into a strong contender. The team’s transformation can apparently be attributed to its ability to train players steadily and diligently with limited funds and the strong bond between the team and its fans.