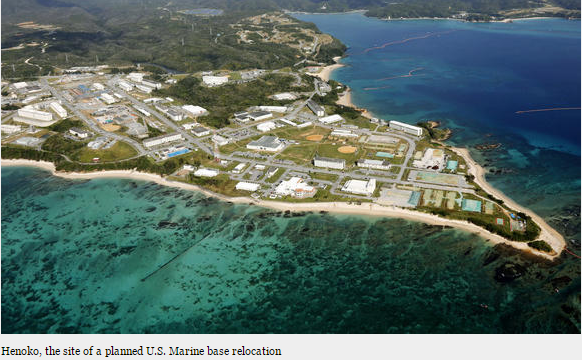 NAHA, Japan — A Japanese district court will rule Friday in the ongoing dispute between Okinawa Prefecture and the national government over the planned relocation of a U.S. military base — months after a settlement was supposedly reached on the matter.

But an unwillingness by either side to compromise means tensions could live on even if a binding ruling is handed down.

The national government charges that Okinawa Gov. Takeshi Onaga acted illegally in revoking permission to relocate the Marine Corps’ Futenma air base from a crowded residential area in Ginowan to reclaimed land in a less-populated coastal area known as Henoko, in the town of Nago. The Naha branch of the Fukuoka High Court in March recommended the parties settle out of court. Landfill activity and facility construction were temporary halted, and the two sides agreed to begin dialogue aimed at a mutually acceptable resolution.

The parties also agreed to unify all outstanding court cases into one lawsuit and abide by an eventual ruling from the country’s Supreme Court. The Naha court will rule in the case Friday, paving the way for a Supreme Court ruling on the issue by the beginning of 2017. Both parties have resisted dialogue so far, apparently convinced of their chances at victory in the courtroom.

“The prefecture has won” in the legal saga so far, an attorney representing Okinawa said. The court’s statement on the March settlement referenced a 1999 legal revision positioning the national government and local governments as equal, cooperative partners in policymaking. Okinawa considers this a sign that the court believes local governments’ views carry weight even on matters of national security.

Okinawa lost its last dispute with the national government over land for the American base in 1996. Then-Gov. Masahide Ota refused to sign a lease to the U.S. military in place of an unwilling landowner. The national government sued, and the case went to the Supreme Court, which ruled that signing the lease was compulsory as part of administrative functions delegated to the governor by the country. Ota’s refusal to sign kept Japan from fulfilling its duties under a security treaty with the U.S., harming the public interest, the court said. This case led Japan and the U.S. to form the now-contested relocation plan. 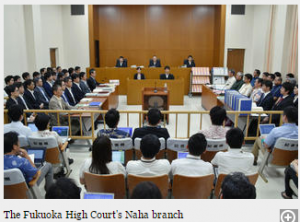 Efforts since then to decentralize political power have boosted the clout of local governments, leading in 1999 to the abolition of the delegated duties on which the 1996 ruling hinged. Though few real-world changes have come of this shift, the 1999 legislative change could allow the court to rule in Okinawa’s favor this time around.

The central government maintains that national security is still a national issue, and expects to win the latest case on similar grounds as before. Scrapping the relocation plan would do tremendous damage to trust between the U.S. and Japan, and make the tens of billions of yen (hundreds of millions of dollars) in taxpayer money already spent on the project a waste, the country argues.

The national government is prepared to argue from the decentralization-of-power perspective as well, claiming that the relocation plan was not forced on Okinawa, but rather was developed in collaboration with the prefecture. Nago was the only Okinawan municipality that agreed to accept the new base in 1996. The mayor who made the decision resigned soon after, and has since been replaced by an official opposing the move. But the Ministry of Justice hopes to have the court recognize “the historical background informing the selection of Henoko,” an official said.

The national government’s agreement in March to attempt an out-of-court settlement hinged on the stipulation that both sides abide by any eventual Supreme Court ruling. But even if a ruling comes down in the central government’s favor, resuming base construction may not be easy. Onaga has said he will abide by the eventual ruling. But he has also pledged to take other steps hindering relocation.

For example, the governor could mount another attempt to block landfill work based on a change of circumstance following the plan’s approval, arguing that relocation opponents’ presence in national and local legislative seats demonstrates popular opposition to the plan. The current challenge rests on the argument that the relocation’s environmental impact was improperly assessed initially.

Onaga could also refuse to sign off on any changes to the relocation plan, which require gubernatorial approval.

The Naha court anticipated this type of protracted battle in March, warning that the governor’s wide discretion over changes created a large risk that the national government could lose its case. Whatever Friday and the next few months bring in the way of a legal ruling, there is no guarantee that the conflict will come to an end anytime soon.