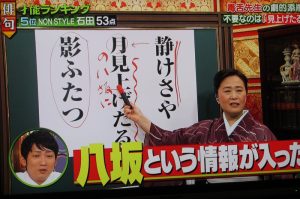 The writing of haiku is often viewed as a pastime of the elderly. But this short verse form is becoming popular among young Japanese as well. One reason is the popular TV show “Pure Bato” (Pressure Battle), in which poet Itsuki Natsui grades haiku written by celebrities, including young actors, singers, comedians, and writers. Every Thursday evening, the outspoken haiku poet candidly critiques poems written by the program’s celebrity guests. The “students” take them very seriously. They express chagrin at receiving harsh reviews and exhibit joy when they receive praise from Natsui. The participants struggle to depict picturesque scenes, such as cherry blossoms, ocean sunsets, quiet moonlight, or silent snowscapes, in three lines of 17 syllables. It might sound easy to compose such a short poem, but the art involves a lot more than just the 5-7-5 structure, such as the inclusion of a “kigo,” or word to indicate the season. Natsui encourages her students by explaining that they can find poetic inspiration in every aspect of their daily lives. 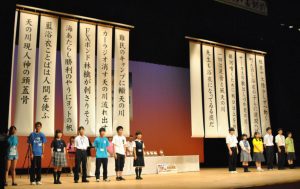 TV personalities are not the only ones who have become inspired to compose haiku. Haiku Koshien, an annual national haiku competition for high school students, is held in Matsuyama every August. Since 1998, about 100 teams from more than 70 schools have participated in the competition. This year, a record number of 137 teams from 102 schools in 34 prefectures took part in the event. The city also hosts an online monthly haiku contest called “Matsuyama Haiku Post 365,” to which anyone can submit a poem at any time. It makes sense for Matsuyama to host haiku-related events because the city has produced a number of master haiku poets, such as Masaoka Shiki and Takahama Kyoshi, and is known as the “capital of haiku.” Natsui is a resident of Matsuyama and she is also involved in these haiku events hosted by the city. 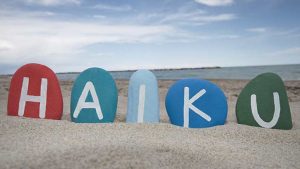 In addition to making it more convenient to enter haiku competitions, the Internet may be contributing to the recent rise in the popularity of haiku among young people. They may feel an affinity for haiku because they are accustomed to composing short messages for communication via Twitter, LINE, and other social media platforms. Though short, their colorful and expressive messages often convey their emotions and ideas in a way that is similar to a haiku.