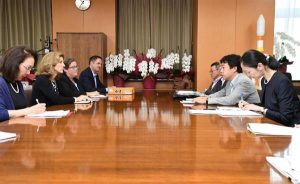 Sankei reported online that Ambassador Kennedy and Okinawa and Northern Territories Affairs Minister Tsuruho held talks at his office on Wednesday and agreed that the United States and Japan will further strengthen cooperation in a wide range of issues, including Futenma relocation and science and technology development. The paper wrote that the Ambassador expressed gratitude for the Japanese government’s efforts with Futenma Air Station and the Northern Training Area. In reply, the minister said Japan will continue to work with the U.S. and that it is important to convey the views of the U.S. and Japan to the people of Okinawa.