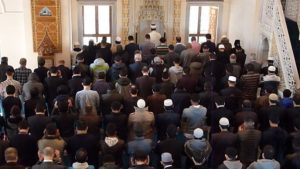 Japanese society is becoming increasingly diverse. Today there are about 100,000 Muslims living in Japan, in addition to about 10,000 Japanese Muslims, according to a survey. The number of Muslim exchange students in Japan is also on the rise. According to the Japan Student Services Organization (JASSO), the number of exchange students from Muslim countries at institutions of higher education in Japan rose from 5,500 in 2004 to 8,500 in 2015. Japanese companies are gradually making efforts to create suitable work environments for Muslim employees. 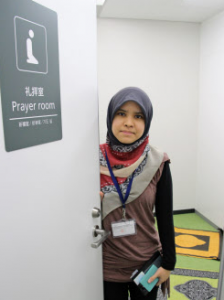 Muslims need to pray five times a day while facing Mecca. This means those who work fulltime need private spaces in the workplace for prayer. According to Nikkei (9/11), Kinki Nippon Tourist Co. officially began hiring foreign employees this spring. After the company hired a Malaysian female who is Muslim, it converted a stockroom to a prayer room. An employee of the company was quoted as saying: “As we hope to continue to hire talented foreigners, we thought it would be essential to accommodate Muslim employees.”  However, many Muslims in Japan are not satisfied with their work environments because Japanese companies are not familiar with such traditions as congregational prayers at mosques every Friday, Ramadan, or women’s clothing.

Food is also a problem for Muslims living in Japan. Due to Islamic dietary law, Muslims are not allowed to consume pork or alcohol. Although they can eat beef and chicken, these must be labelled as halal. As a result, many Muslims in Japan end up eating fish most of the time. In response to a request by one of its Muslim employees, industrial diesel engine manufacturer Yanmar Co. began providing Muslim-friendly dishes at its employee cafeteria in March this year. According to Nikkei, the company has at least five Muslim employees at present. Noting that the ratio of Yan

mar’s sales volume overseas has reached about 50% on a consolidated basis and the number of clients from Muslim nations is increasing, the paper said Yanmar also created a prayer room so that not only its Muslim employees but also Muslim clients will be able to pray there.

Major online shopping site operator Rakuten is also Muslim-friendly. At Rakuten, which announced that English will be its official language in 2010, about 20% of the employees are foreigners. With the relocation of the company headquarters to Setagaya, Tokyo, last August, Rakuten began providing halal options as well as vegetarian options for Indians and others at its employee cafeteria. According to the paper, about 65 employees have registered for the halal option, and 100 for the vegetarian option.

About 1 billion of the world’s 1.6 billion Muslims live in the Asia-Pacific region. In order to hire highly skilled foreigners, Japanese firms can no longer ignore people from Asian nations, many of whom are Muslim. The paper wrote that accommodating Muslims will be a litmus test for Japanese companies in securing diverse human resources.