Onaga calls for cancellation of Henoko plan in talks with Nikai 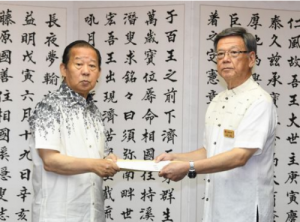 Ryukyu Shimpo gave top play to a report on Okinawa Governor Onaga’s meeting with LDP Secretary General Nikai at his office on Wednesday. Onaga handed Nikai a written request for the GOJ to cancel the Henoko plan, saying: “Okinawa’s relations with the central government are tense due to issues related to U.S. military bases. The GOJ is not giving consideration to building a relationship of trust with Okinawa. We hope that the LDP will help us hold smooth discussions.” Nikai said in reply: “Although there are many difficult issues, we must work together to overcome these difficulties. In view of the Okinawan people’s past and present cooperation for ensuring peace in Japan, it is time for us to return the favor.” Nikai was asked by a reporter after the meeting about his views as a senior LDP official on the GOJ’s position that Henoko is the only option for Futenma relocation. Nikai responded by saying that the LDP is ready to listen to the opinions of the Okinawan people in a flexible manner.