NHK learns poverty in the eye of the beholder 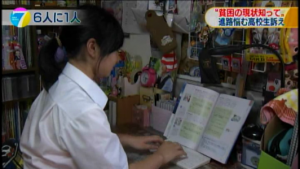 Quasi-governmental broadcaster NHK was bombarded with criticism in social media in mid-August for featuring an 18-year-old girl in a report on a news show focusing on child poverty in Japan. The report, viewed by more than 12 million people, explained that the high school student is being raised by a single mother and is unable to pursue her dream of going to design college because of financial difficulties. The girl first became aware of her family’s dire economic situation several years ago when she couldn’t afford to buy a computer even though everyone else in her class had one. Her mother bought her a used keyboard instead so she could at least practice typing.

Immediately after the program was aired, online bashing of the network and the girl began. People accused her of pretending to be poor, pointing to the air conditioner, shelves of manga, and menagerie of stuffed animals in her room. Skeptics gleaned from her Twitter account that she owns a smartphone, sometimes eats at restaurants, and recently went to a pop concert. “There’s no way a girl who has an iPhone and eats out can be poor,” said one person, while another said, “Why did NHK portray her as poor even though she had a trove of manga in her room?” The character assassination continued: Her name, address, and other personal information were posted on an Internet bulletin board along with groundless accusations about her private life. “Jiko sekinin,” a phrase meaning “personal responsibility,” was also batted around in cyberspace. “We are not responsible for her being underprivileged; she got what she deserved!” said one person. The story went viral when well-known LDP female pol Satsuki Katayama wrote on Twitter that the teenager could buy a computer if she stopped wasting money on luxury items. 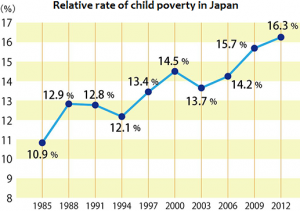 Academics and activists are upset by the controversy because it was triggered by people who are ignorant of the various forms that poverty takes. For many Japanese the word “poverty” conjures up an image of starving children in refugee camps in Africa. However, few Japanese today are living in abject poverty. Rather experts underscore the high relative poverty rate in Japan. The relative poverty rate is the percentage of the population whose income is less than half of the national average, or the percentage without the minimum income needed to maintain the average standard of living. Japan’s relative poverty rate for children under the age of 18 rose from 10.9% in 1985 to 16.3% in 2012. Some 3.25 million children, or one out of six, are believed to be living below the poverty line. For children in single-parent households, the rate is as high as 51%. These children are deprived of things that many take for granted, such as medical care, test-preparation classes, and school field trips. 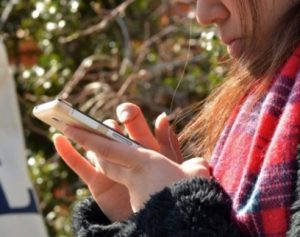 Despite the fact that there are many juveniles living in poverty, their plight often goes unnoticed partly because some parents manage to provide a decent lifestyle for their children at the expense of their own wellbeing. “Almost all high school students today have smartphones,” said chief analyst Akio Doteuchi of Nissei Research Institute on Fuji TV (8/26). “They hang on to their cellphones even at the expense of food or clothing because without access to social networks, they could easily be ostracized. Nice-looking clothes and meals are available at cheap prices thanks to decades of deflation. However, some students are not able to participate in school excursions or attend university for financial reasons. Poverty should not be defined by whether someone has certain items or not. Instead, an individual’s entire lifestyle should be examined and compared with the average standard of living.”

In a Tokyo Shimbun (8/23) article, Sophia University media specialist Hiroaki Mizushima faulted NHK for broadcasting video of the girl’s roomful of possessions that gave some people ammunition to portray her as “pretending to be poor.” “NHK’s careless reporting has triggered bashing of the poor in social media,” he said. “Other networks will probably hesitate to take up the subject. And people living in poverty may become reluctant to raise their voices.”

Some experts criticized Katayama for spreading the wrong perception about poverty. Professor Ryoichi Yamano of Nayoro City University in Hokkaido said in a BuzzFeed Japan (8/28) article: “Katayama should not divide and mislead the public. An influential Diet member like her should work to forge a society-wide consensus on reforming the current system to support and empower children living in poverty.” The scholar pointed out that Japan spends much less on education than other industrialized economies. OECD finds that Japan spends only 1% of its GDP on children and education. The corresponding figures for the UK and Sweden are 3.8% and 3.7%.