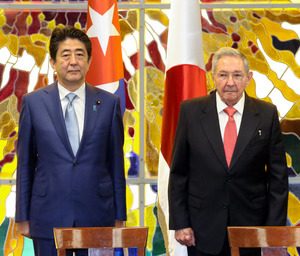 All networks gave top play to reports on PM Abe’s historic visit to Cuba on Thursday. The networks said the premier held a meeting with Cuban President Castro for about 45 minutes and confirmed Japan’s increased investment in the country and called for Cuba’s cooperation in dealing with North Korea. Fuji TV also reported that the two nations agreed that Japan will provide about 1.3 billion yen worth of medical equipment in grant aid to major hospitals in Cuba. TV Asahi said there were two purposes for the premier’s visit to Cuba: to ask for cooperation on North Korea since Cuba has friendly relations with the nation and to strengthen economic cooperation with Cuba. Noting that Abe’s visit came days before Chinese PM Li’s planned visit to Cuba, TV Asahi said the premier’s visit is also aimed at keeping China in check as it is increasing its influence in the region.