Japan to strengthen ties with Cuba 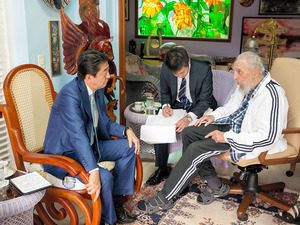 All Saturday morning papers reported on Prime Minister Abe’s visit to Cuba on Sept. 22-23, during which he expressed Japan’s strong desire to strengthen its ties with the nation at a meeting with President Raul Castro by presenting a 13-point economic assistance package for Havana. During the meeting, Abe expressed strong concern over North Korea’s nuclear and missile development and called on Cuba to apply pressure on Pyongyang to resolve the abduction issue. Abe held a separate meeting with former President Fidel Castro at his residence in Havana, during which they agreed on the goal of seeking a world without nuclear weapons.