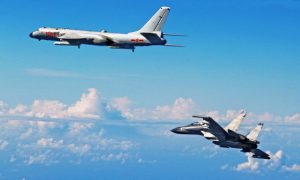 All Monday papers reported on the announcement on Sunday by the Defense Ministry that it has confirmed that two aircraft believed to be Chinese fighter jets, four bombers, and two spy planes flew over the strait between Okinawa’s main island and Miyako Island on Sunday. This was the first time for Chinese fighter jets to fly over the area. Japan scrambled a fighter jet against the Chinese aircraft, which did not enter Japan’s airspace. The Chinese Air Force announced on Sunday that more than 40 aircraft, including fighter jets and refueling planes, flew over the Miyako Strait to conduct a drill over the western Pacific.