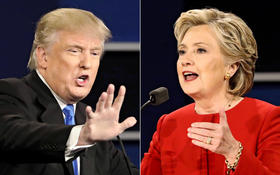 Most papers front-paged reports on the first debate held on Monday between Democratic candidate Hillary Clinton and Republican candidate Donald Trump for the Nov. 8 presidential election. The papers highlighted their discussions on the TPP and the U.S. defense of Japan and other allies. Trump criticized Clinton for “changing her position” on the trade agreement. He reiterated his assertion that the U.S. should not defend Japan unless it pays additional costs for hosting U.S. forces. Clinton responded by reaffirming and expressing respect for the alliances with Japan, the ROK, and other nations with which the U.S. has defense cooperation agreements. Asahi wrote that it is unusual for the U.S.-Japan alliance to be discussed at a presidential election debate. Yomiuri and Nikkei wrote that the Japanese government is watching the discussions between the two candidates with great interest, with Nikkei saying Tokyo is alarmed by Trump’s repeated references to Japan.