Creating a society that tolerates diversity 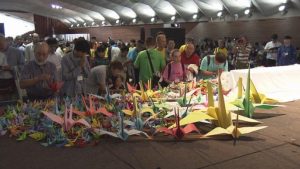 NHK’s “Close-up Gendai Plus” reported on the Sagamihara massacre that occurred two months ago, in which 19 residents of a facility for the disabled were killed and  many others were injured by a 26-year-old man who claimed that the disabled “only create unhappiness.” The program said many disabled and socially vulnerable people in Japan are feeling uncertain about their place in society following the horrific incident, adding that some fear that Japanese society is becoming intolerant of diversity. The program also introduced Fujisoft Kikaku Inc., which hires about 130 people with physical and intellectual disabilities as well as people who are suffering from depression, and lets them work together. The employees help each other with their work and are able to work freely without hiding their disabilities or illnesses. Journalist Akira Ikegami stressed the importance of diversity and said that seeking a homogeneous society is dangerous.