TOKYO — A lunar exploration team led by ispace technologies, a Tokyo-based aerospace startup, began a test-run of its lunar rover Tuesday on sand dunes in Tottori Prefecture, western Japan. The Hakuto project team is testing the four-wheeled robot’s ability to communicate and shoot video while moving across the dunes. 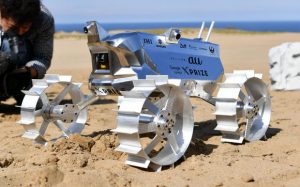 The project aims to put the finishing touches on the rover by the end of the year and send it to the moon in 2017.

Hakuto is the sole Japanese team competing for the Google Lunar Xprize. The first team that succeeds in landing a rover on the moon, navigating it at least 500 meters across the surface and sending high-resolution images back to Earth, will receive a monetary prize.

The demonstration in Tottori involves two models of the lunar rover. On the first day of the test, the team checked the vehicle’s four cameras and a sensor to verify its ability to capture images.

The fine-grain sand of the Tottori dunes is similar in texture to lunar dust, although the environment is very different. Without an atmosphere to deflect them, the sun’s rays strike the moon’s surface nearly head-on. On Earth, light is refracted by the atmosphere. The team simulated conditions on the moon using artificial lights at night for the tests.

A number of Japanese companies, including Suzuki Motor, Japan Airlines and IHI, are providing financial and technical support to the project. KDDI is offering expertise in telecommunications.

Financing has been a major hurdle for the first private Japanese group to develop a lunar probe. To minimize costs, the team uses off-the-shelf auto and smartphone components for 70% of the rover’s own parts. Transporting a rover to the moon can cost 120 million yen ($1.18 million) per kilogram. The project team has managed to cut the rover’s weight by 3kg over the past year. The vehicle now weighs about 4kg.