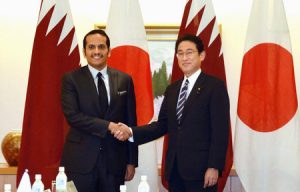 Sankei wrote that Foreign Minister Kishida held talks with his Qatari counterpart Sheikh Mohammed bin Abdulrahman al-Thani on Monday at MOFA and agreed to cooperate in ensuring a stable supply of liquefied natural gas and crude oil. The two nations also agreed to strengthen their security cooperation to combat terrorism. Kishida said that Japan would like to boost bilateral cooperation in a wide range of fields. The Qatari foreign minister said in reply that Japan is an important partner for Qatar and that his nation hopes to cooperate with Japan in areas other than energy as well.