Women’s work at Calbee is crisp and efficient

One focus of the Abe administration is reforming Japan’s notoriously harsh working conditions characterized by excessive overtime. PM Abe is eager not only to rectify the practice of working long hours but also to realize equal pay for equal work. According to a survey by the Japan Institute for Labour Policy and Training, the percentage of people working more than 49 hours a week in Japan is 21.3%, while it’s only 12.5% in the UK, 10.1% in Germany, and 10.4% in France. A panel of Cabinet ministers and experts from the private sector chaired by PM Abe is expected to come up with a concrete action plan by March so that a relevant bill can be submitted to the Diet. At the inaugural meeting held on Sept. 27, the premier said: “Reform of Japanese working practices is the third arrow of Abenomics, one of the pillars of structural reform.” PM Abe is apparently serious about it because he even created a new cabinet minister post in charge of work-style reform and gave it to his close aide Katsunobu Kato. 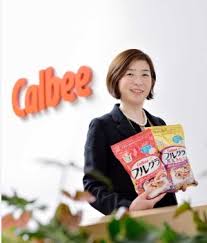 However, some people are still skeptical about the idea and express concern that work-life balance runs counter to profit making. But according to Asahi (10/3), there’s one company that has managed to maintain successful operations while helping employees achieve work-life balance. Calbee, a major Japanese confectionary company, increased the percentage of women in management from 5.9%, or 11 employees, in 2010 to 22.1%, or 63 employees, in 2016. The company is hoping to increase that rate to 30% by 2020. These figures are remarkable considering the fact that the average ratio of female management at similar-sized private companies in Japan was 4.2% in FY2015. The company had its first female corporate officer who opted for jitan kinmu, a system of working a shorter number of hours, in 2013 and its first female plant manager in 2014. A lot of this success can be attributed to CEO Akira Matsumoto, who took up his post in June 2009. Matsumoto’s previous job was head of Johnson & Johnson Japan, where he also successfully increased the ratio of female management and changed the company’s working practices. When he joined Calbee, his first impression was that it was “a man’s w 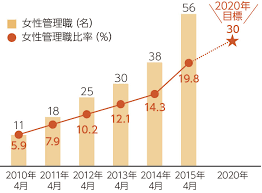 orld.” He immediately declared that there can be “no corporate growth without women’s empowerment” and worked hard to promote diversity within the company.

Many of the female managers at Calbee work extremely efficiently and utilize shorter working hours and telecommuting to achieve work-life balance. One employee says: “When considering childcare and elderly care, regardless of gender, it is very important to have work practices that place importance on performance and not on the number of hours worked.” Calbee’s profitability is continuing to grow along with the increase in the ratio of female managers. While CEO Matsumoto says he’s not sure if there’s a direct connection between the company’s profitability and his efforts to promote diversity, he says he has been making all-out efforts to maintain the company’s profitability so that people will not blame his diversity policy if there is a decline in business performance. Calbee COO Shuji Ito says: “If the percentage of female employees is 40%, the ratio of female management should also be 40%. Some criticize us by saying we’re trying to promote women even though they don’t deserve it, but we’re just demoting men who were promoted even if they didn’t deserve it in the first place. I think society as a whole will change in the same way.”